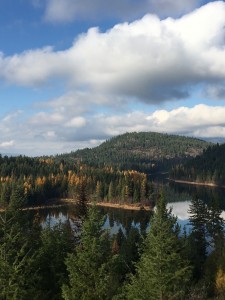 On July 8, community members and collaborating partners will gather in Troy, Mont. to celebrate the founding of Alvord Lake Community Forest. The 142-acre forest is the result of more than a decade of efforts to protect the lake's scenic shoreline from real estate development. After partnering with local group Friends of Alvord Lake and many other contributors, the Vital Ground Foundation purchased the parcel thanks to a generous grant from the U.S. Forest Service's Community Forest Program.

Missoula, Mont., July 6, 2016 (Newswire.com) - In the northwest corner of Montana, a coalition of partners recently turned a piece of lakeshore slated for subdivision into a new type of public forest. The Alvord Lake Community Forest exists largely because of the U.S. Forest Service’s Community Forest and Open Spaces Program. Launched in 2012, the fund remains vastly underutilized in the West, with more than two-thirds of its 35 recipients lying east of the Mississippi.

"We have an opportunity to restore some of the past species composition, to make it a much healthier forest. At some point in time, we'll have something we'll all be real proud of."

Just north of the 957-person town of Troy, perched amid the fast-dropping slopes of the Purcell Mountains, the sickle-shaped lake offers a transition zone for wildlife between the ridges above and the developed Kootenai River Valley below. Common loons nest along the lake during summer, while moose, deer, and elk browse its conifer-lined shore during winter. It’s a popular spot for humans, too, with the Forest Service maintaining a three-mile trail around the lake and an outdoor classroom frequented by school and community groups.

All but one-third of a mile of the lake’s shoreline falls in Kootenai National Forest. The remaining parcel of 142 acres was long owned by Plum Creek Timber Co., but at the turn of the millennium, the logging giant deemed it “highest and best use land,” harvested it exhaustively, and sold it to Montana Mountain Valley, a real estate developer with plans to subdivide the plot. “They had one thing and one thing only in mind,” said Troy resident Gary Jones. “To make money.”

Jones, his wife Kathy, and other citizens had a different goal. After Forest Service representatives explained the proposed development at a community meeting in 2002, the Joneses formed Friends of Alvord Lake, LLC, then fronted the $800,000 necessary for the group’s eleventh-hour purchase of the parcel. “That land became our IRA,” Jones said.

Intended as a stopgap measure, the couple’s investment sat for over a dozen years. Although the community favored a Forest Service purchase of the parcel, federal funding was scarce. “I’d get calls from Gary every few years saying things like, ‘The Forest Service doesn’t have any money, nothing’s happening,’” recalled Gael Bissell, a state wildlife biologist at the time. “He’s a patient soul.”

Patience would eventually meet financial realty for the Joneses, however. With state and federal conservation possibilities exhausted, the couple faced the prospect of selling the land back to a developer. That’s when Bissell learned of the new Community Forest Program. “When I looked it up and it said public access, managed forest land, wildlife habitat, community support, education—it fit every criteria,” she said. “It was a hit out of the park.”

The program requires that a local or tribal government, or a qualified land trust, manage the intended land, and that applicants prove local support of the project by securing at least half of its funding from non-federal sources. So Bissell approached the Vital Ground Foundation, a Missoula-based land trust focused on conserving and restoring grizzly bear habitat. She also teamed with USFS District Ranger Kirsten Kaiser to conduct a meeting evaluating local interest. “The community reacted very favorably,” Kaiser recalled. “It’s a favorite place.”

With Vital Ground signing on, the coalition recruited volunteers from the Society of American Foresters (SAF) chapter in nearby Libby to inventory the parcel and write a forest management plan. Bissell also worked with the local conservation group Yaak Valley Forest Council to detail the parcel’s habitat value and educational benefits as a demonstration forest. The result was “a pretty technical application,” according to Bissell, and, in 2014, a $400,000 grant from the Community Forest Program. More than a dozen other local, regional, and national donors joined the fundraising effort over the next year, and in December 2015, Vital Ground closed on the property, fulfilling the Joneses’ conservation goal at last.

Now, the community will christen its new forest with a free public celebration at the lake on July 8. Attendees will learn about the area’s natural history, the Community Forest model, and plans to restore and utilize the space.

“We have an opportunity to restore some of the past species composition, to make it a much healthier forest,” explained Ed Levert, Chair of the Libby SAF Chapter. “At some point in time, we’ll have something we’ll all be real proud of.”

And with Alvord Lake providing a model of collaboration, one can hope that new Community Forests will become a growing source of pride across the West.