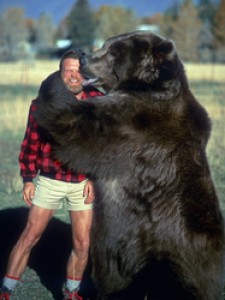 July 19, 2010 (Press Release) - The Vital Ground Foundation, a Missoula, Montana-based land trust dedicated to protecting habitat for the threatened grizzly bear and other wildlife, will be celebrating its twentieth anniversary on September 11, 2010 at a special fundraiser in Park City, Utah.

The organization will be hosting the fundraiser at the Deer Valley Resort's Snow Park Lodge. Starting at 5:00 pm, the event will feature dinner, an auction, musical entertainment, and a rare live performance by Bart the Bear 2, the 1,100 pound grizzly featured in the recent films "Into the Wild" and "Did You Hear About the Morgans?"

Tickets are $125 per person and can be reserved by calling 406-549-8650 or visiting vitalground.org. Net proceeds will benefit Vital Ground's conservation work in the Northern Rockies.

Founded in 1990 by internationally recognized animal trainers Doug and Lynne Seus of Heber City, Utah, Vital Ground has worked with a variety of individual, corporate, foundation, agency, and community-based partners and supporters. In its twenty-year history, the group has helped to protect nearly 600,000 acres of crucial wildlife habitat in grizzly country, stretching from the Yellowstone Ecosystem of Wyoming to southern British Columbia and Alaska.

The Seus husband and wife team raised and trained a zoo-born Kodiak grizzly they named Bart the Bear to appear in feature films, which included "Legends of the Fall," "The Edge," "White Fang," and "The Bear." Before his death in 2000, Bart had worked with some of the biggest names in Hollywood, from Brad Pitt to Sir Anthony Hopkins.

"Bart was our inspiration to start Vital Ground," says Lynne Seus. "We couldn't really make up to him the fact that he was born in captivity or that he spent his life in the human world. But starting Vital Ground was something that we could do for Bart's wild brothers and sisters, and give him a legacy. The first thing we did two decades ago was to take our retirement savings and buy a ranch along Montana's Rocky Mountain Front and then give it back to the wild ones."

Vital Ground is unique among conservation organizations in North America. It is the only one focused exclusively on grizzly bear habitat that involves private lands. This not only protects acreage in key corridors and seasonal ranges, but also strengthens the habitat conservation efforts on public and other protected lands.

"With every acre of land Vital Ground protects for the grizzly, we are directly, immediately affecting the health of our planet," states Doug Seus.

Grizzlies are known as a keystone species, a term that refers to the bear's functional role within its ecosystem.

"When the land remains open and intact enough for the grizzly to use, all the other wild animals and native plants in the ecosystem benefit as well," says founding board member and author Douglas Chadwick.

Over the last two centuries, grizzlies have been forced out of ninety-eight percent of their original range, much of which has been permanently lost to development. Today only about 1,500 grizzly bears survive in the lower 48 states in five distinct, separated populations. At the time of Lewis and Clark, 50,000 to 100,000 grizzlies roamed North America.

"We can't turn back the clock and restore the pristine environment of centuries ago, but we can protect the key private lands essential to maintaining wildlife habitat connectivity and provide opportunities for the Great Bear to expand its range into suitable unoccupied habitat," states Gary Wolfe, Vital Ground's executive director. "This is our charge and our urgency," he adds.

For more information about Vital Ground or the twentieth anniversary celebration, phone 406-549-8650 or visit vitalground.org. Event sponsorship opportunities are available.

The Vital Ground Foundation is a tax-exempt, publicly supported charitable organization working to ensure the recovery and long-term survival of grizzly bears, together with the many native species that share their range, through the protection and restoration of core habitats and landscape linkages.